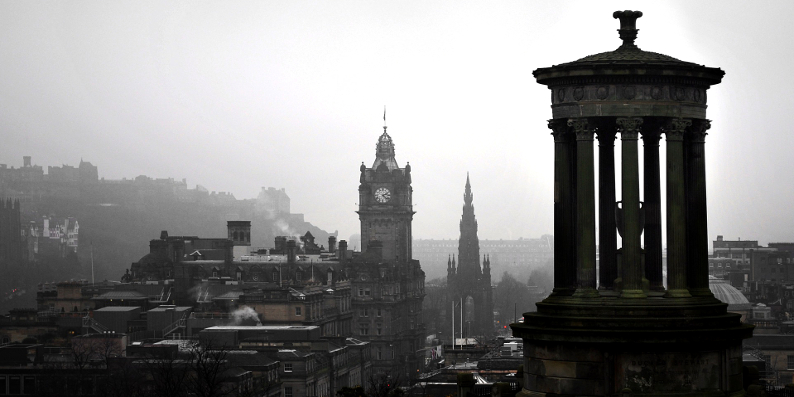 Bonnington, Edinburgh is the townland of our Thistle St. branch.

Registered Address's office there in Thistle St. is nearer to Edinburgh Old Town than it is to mills which formed the nexus of Bonnington in days gone by.

The Bonnington area itself centres upon an original village which grew up around a ford on the Water of Leith on the old boundary between Edinburgh and the port of Leith.

Thistle Street is part of an unusual 'chain-link' of similarly-named 'Thistle' streets. They contain mainly office premises and modern, niche retail outlets, outside which area are the standard retail businesses common to a city centre location.

A potted history of the wider townsland, abridged from Wikipedia:
The land and mills of 'Bonnytoun' formed part of the Barony of Broughton mentioned in King David I’s confirmation charter to the Abbey of Holyrood in 1143. Bonnington was a milling village making use of the river’s water-power.

In 1617 the land and mills were sold to the Town Council of Edinburgh by the then landowners, the Logans of Restalrig.

A waterwheel of the ‘undershot’ type, from the Bonnington Mills, was saved and in the 1980s was moved to a new position on the site of the mill lade.  The water power generated was used to mill grain, weave cloth, tan leather and manufacture paper.

In the 19th and 20th centuries, the area on the north side of Bonnington Road stretching eastwards to Leith became one of mixed types of industrial, business and retail premises, including a major printer’s works, sugar bond and engineering works. Some of these premises have been converted to new uses in recent decades.

One of the larger developments in the area from the 1980s is the storage depot of the John Lewis Partnership in Bonnington Road Lane. New housing built along the river bank has changed the face of the area.
A virtual tour of Thistle St via Google Maps reveals narrow, cobblestone lanes, dinky cafes, reserved office buildings, muted colours, discreet advertising and a sense of 'middle-class aspirational' for want of a better phrase.

If the area's residents could speak collectively, they might say 'we have money, we're doing quite nicely, we're moving into the 21st century, it's still a little funky around here, Jenny's new artisan cafe might fail but someone else will lease the premises fairly quickly.'  That sort of thing.

We recommend our Holborn Viaduct address for the following niches: