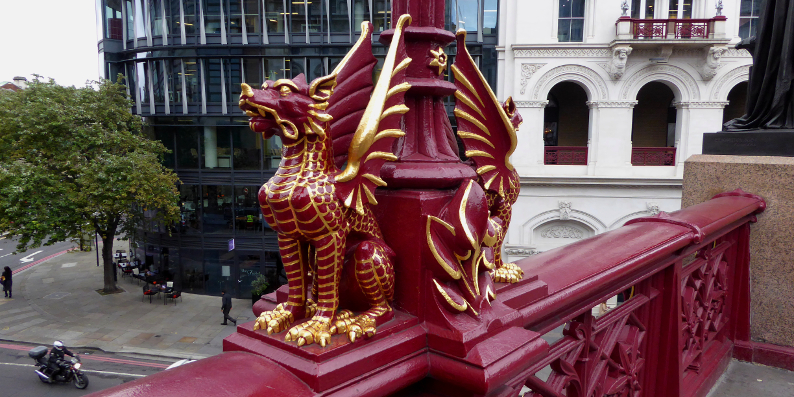 Farringdon, London is the townland of our Holborn Viaduct branch. Holborn Viaduct is the first flyover built in London in the Victorian era, and was opened by Queen Vic herself.

The bridge is quite ornate, rendered in red-painted, substantial wrought iron and decorated with bronze statues of mythological persons and creatures. It is a product of a more self-confident era. Our office is adjacent.

William and Nicholas de Faringdon were two related prominent citizens and Aldermen of the City in the early 13th century.

Farringdon Street was built over the River Fleet in 1737. The area was previously the location of Farringdon Market, established for the sale of fruit and vegetables on 20 November 1826 when the earlier Fleet Market was cleared to enable the laying out of Farringdon Street.

Planned redevelopment and expansion of Farringdon Station is expected to have a significant effect on the local area. The station is currently served by the Thameslink north-south rail route; it is planned that this will be supplemented by a future east-west Crossrail service which will require the construction of additional station entrances.

This will be part of the Elizabeth line, and is due to open in December 2018.

Holborn Viaduct links Holborn, via Holborn Circus, with Newgate Street, in the City of London financial district, passing over Farringdon Street and the subterranean River Fleet. It was built between 1863 and 1869. It was opened by Queen Victoria at the same time as the inauguration of the other thoroughfares with a formal coach drive procession.

Pedestrian access between the two street levels was effected via four pavilions, at each side and either end, containing staircases for access from the viaduct to Farringdon Street below; with their parapets adorned with figurative statues to represent commerce and agriculture on the south side,  with science and fine art on the north side.

Holborn Viaduct railway station, opened in 1874, was at the eastern end with a low-level through route towards Farringdon, and was replaced in 1990 by St. Paul's Thameslink railway station (later renamed City Thameslink).

Our Holborn Viaduct branch is served by St. Pauls and Chancery Lane on the Central Line, Farringdon Station (tubes and rail) and City Thameslink railway station.

The area, being primarily offices and retail, is served by the minimum necessary to keep the workers going: supermarket, cafes, pub, chemist etc.

However, the kind of businesses which operate here tend not to have to advertise their presence here very much. They are major corporations, like Amazon, which has an office adjacent to the Viaduct itself.

If you throw a stone here you will 1. Hit a historic or wildly-expensive building and 2. Be picked up by the City of London police pretty fast, we dare say.

We recommend our Holborn Viaduct address for the following niches: