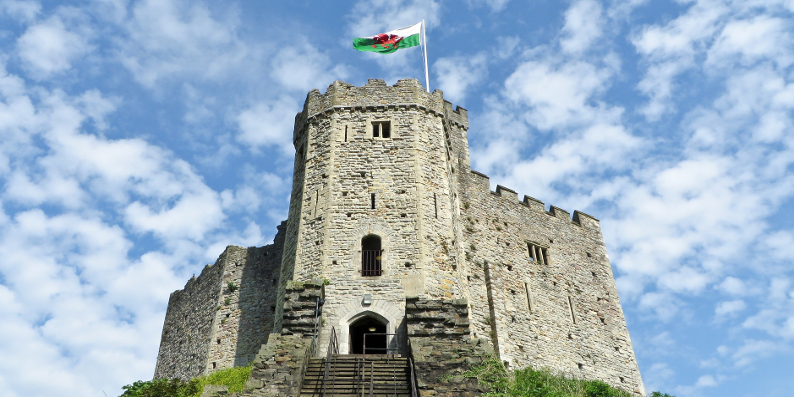 When Englishmen think of Wales, they think of the Red Dragon symbol, green valleys, coal-mining, choral singing, rugby-playing and a certain whimsical outlook on life.

Wales is the farthest point west in the UK and is one of the countries that make up Great Britain. It can properly be described, like Scotland, as a Celtic nation.

Wales has its own national language, Welsh, and has had some success in maintaining it as a living language, commonly spoken.

→ Get an address there

Cardiff is its capital city. What is it like?

'Caerdyf' has its origins in post-Roman Brythonic words meaning "the fort of the Taff". The Taff is the river that flows through it and it is suggested as one source of the nickname for Welshmen: "Taffy".

It is Wales's chief commercial centre, the base for most national cultural and sporting institutions, the Welsh national media, and the seat of the National Assembly for Wales. Cardiff is a significant tourist centre and the most popular visitor destination in Wales.

The city is the major transport hub in Wales and is the focus for many arterial road and rail routes that connect the city with Wales and England. Domestic and international air links to Cardiff and South & West Wales are provided from Cardiff Airport (CWL), the only international airport in Wales.

In 2011, Cardiff was ranked sixth in the world in National Geographic's alternative tourist destinations. It is part of the Eurocities network of the largest European cities.

Since 2000, there has been a significant change of scale and building height in Cardiff, with the development of the city centre's first purpose-built high-rise apartments. Tall buildings have been built in the city centre and Cardiff Bay, and more are planned. Between mid−2007 and mid–2008, Cardiff was the fastest-growing local authority in Wales with population growth rate of 1.2%.

As the capital city of Wales, Cardiff is the main engine of growth in the Welsh economy. Though the population of Cardiff is about 10% of the Welsh population, the economy of Cardiff makes up nearly 20% of Welsh GDP.

The city is home to Welsh media and BBC Wales, S4C and ITV Wales all have studios there. In particular, there is a large independent TV production industry sector of over 600 companies, employing around 6000 employees and with a turnover estimated at £350m.

The majority of Cardiff's shopping portfolio is in the city centre around Queen Street and St. Mary Street, with large suburban retail parks located in Cardiff Bay, Culverhouse Cross, Leckwith, Newport Road and Pontprennau, together with markets in the city centre. A major £675 million regeneration programme for Cardiff's St. David's Centre was completed in 2009, which has provided a total of 1,400,000 square feet (130,000 m2) of shopping space, making it one of the largest shopping centres in the United Kingdom.

Cardiff Castle is a major tourist attraction in the city and is situated in the heart of the city centre.