Avoid Letters Being Returned To Sender 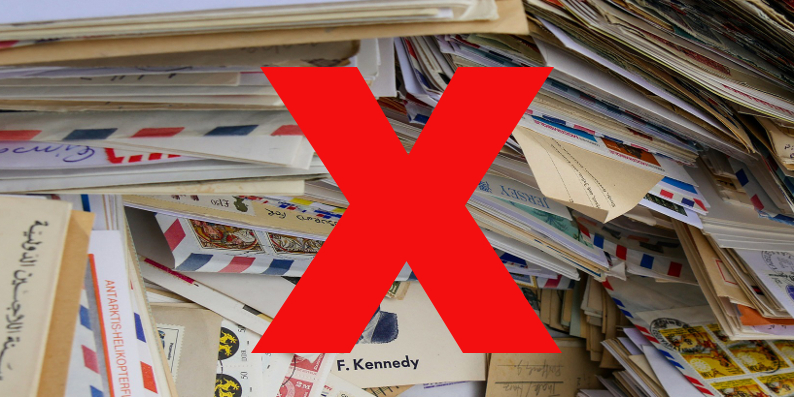 We get lots of letters here at Registered Address. Lots and lots. Most of them we forward to our clients, but some we do not; we return them to sender. Why? Here are the reasons:

1. The letters are for not for our clients.

Some people try to use our address without paying for it. This is not a great idea, as we return those letters to sender. Why is that bad? Read on.

2. The letters are for our clients, but the account is not in good standing.

We email the client, then keep those letters for 14 days while they have the chance to remedy the error. After that, we return them to sender if the account is still not in good standing.

Why so mean? Well, if we kept them, two things would happen:

Office space is not cheap in London and a huge number of letters would create a massive filing problem.

2. The sender would think you had received them, and then act accordingly.

This could have very bad consequences, if the letter had legal implications.

If the letter is returned to sender, at least the sender realises that you have not read it. They may grant you a grace period.

Still, letters being returned to sender is not ideal and can have its own negative consequences. Here are a few:

- It makes your business look bad.

A big customer or a supplier gets their letter back, weeks later, with a red 'return to sender' stamp on it and your address crossed off. How does that look?

It says to them: 'This guy has moved office without telling me, or his business is going bust or he might be operating a scam ...'.

This is the exact opposite of the impression most small businesses what to give to their clients and suppliers. It is is very, very foolish not to pay your postman, especially when he, as Registered Address does, does his best to filter out junk mail.

We live in an era of emails and smartphones but not all communications can be done by them. Government agencies, lawyers, courts and banks will often only communicate by letter. Letters are trackable, tangible and much harder to fake or be sent in error.

A tracked physical letter sent to a physical address has much more import and substance than a phone call, text or email. The idea is: 'This communication was posted to you on this date, received on this later date and we, the sender, kept a copy. You can't say you didn't get it'. You, the recipient, can bring it to a court of law to argue its contents and a judge can look at it in his hands. It can't be easily faked or made to disappear.

Some things, like authentication codes and scratch-off passwords, can only be sent in letters, for security purposes.

Some things, like debit cards and dongles, cannot be digitised. They have to be sent in a letter.

So what happens when these items are returned to sender?

Letters returned to sender are a big red flag that a fraud may be occurring. To protect themselves and you the client, they freeze your account and then you have the hassle of liaising with them to unblock it.

This can seriously damage your business at a crucial time with regard to making timely payments to suppliers.

- Law firms: A solicitor will proceed with his case against you.

Letters returned to sender work out well for an adversarial lawyer. He can show he tried to contact you at your legal address when he presents his case against you, but you never responded. And so ...

- County Court: A court will simply carry on with the case against you.

You might think if they get a letter returned to them, they might delay or stop the case. Wrong. It goes ahead, you get a judgement against you because you haven't defended against it and then your credit-rating tanks, never mind the embarrassment of having that judgement listed against your company, publicly.

HMRC and Companies House send out reminder letters when annual returns are due. New entrepreneurs sometimes think they have no obligations to maintain their company, if it's not making any money. Wrong.

You have to submit returns, starting after one year of trading and if these returns are not done on time, and any taxes owed paid, fines are automatically issued against the company.

If you don't get the letters you're oblivious, until one of your suppliers says he won't deliver because his accountant has flagged up your delinquency.

We at RegisteredAddress.co.uk much prefer to forward clients' important letters. It better for them, obviously, and it's much less hassle for us than to have to deal with panicked customers realising that they have only 4 days to act before they get a fine and Companies House is taking its time sending them their authentication code!

There's an old saying: "Penny wise and pound foolish". Skimping on postal costs because money is tight and 'hey, I do all my business on the internet, my letters aren't important' could cost you a good deal more than the cash value of getting your significant letters in good time, all the time.