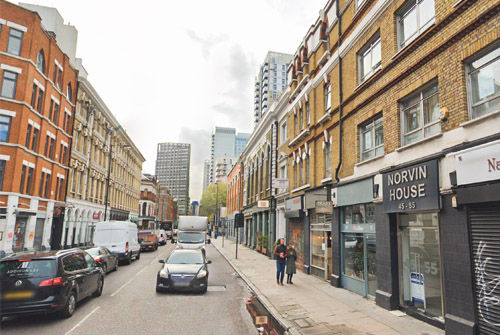 Commercial Street is an arterial road in Tower Hamlets, east London that runs north to south from Shoreditch High Street to Whitechapel High Street through the East End district of Spitalfields. It has historically been dominated by industrial and commercial activity, which it maintains to this day.

Since the early 1990s the street has grown increasingly fashionable, while maintaining its busy commercial feel. It is listed on Wikipedia.

Since the mid-1970s  the area has been increasingly subject to a process of gradual gentrification. Commercial Street in particular was stimulated by the departure of old Spitalfields Market in 1991 and the arrival of a number of private residential developments. Many of the commercial units in the street are now occupied by fashionable clothing shops or restaurants.

Nearby Amenities: The street's most significant features are Hawksmoor's grand Christ Church, on the corner of Fournier Street; and Old Spitalfields Market, the old fruit and vegetable market. The nearest London Underground station is Aldgate East, at Commercial Street's southern end. Shoreditch High Street London Overground station is close to the northern end. London Liverpool Street is a major National Rail and London Underground interchange, a short walk to the west. The area is well served for shopping and dining.